When atoms in a molecule share electrons, they are covalently bonding. An example would be H2​, which has two identical atoms of hydrogen (called homopolar or homonuclear bonding).

Features of covalent bonding include:

The dissociation energy of a molecule indicates the energy needed to break the molecule into neutral atoms.

As the atomic number increases, the s electrons become associated with higher principle quantum numbers, n. This leads to lower dissociation energies since the equilibrium separation increases (due to higher average radius).

Atoms with p states can also form covalent bonds, and the three atomic p states lead to six possible molecular p states. The three values of ml​ lead to the three "figure-eight" shaped distributions for p states: for ml​=0 we see a distribution with two lobes aligned with the z-axis. For ml​=±1, we observe a smeared out figure-eight distribution in the xy-plane due to the uncertainty principle. Instead of ml​ values, we use px​, py​, and pz​ to represent these distributions (even though the x and y ones cannot be observed, they do exist).

Bringing two atoms with p states together overlaps their probability distributions along one of the axes (assuming they approach along the x-axis is convention). The px​ states overlap, producing a significant attractive force between the nuclei and electrons. The py​ and pz​ states also overlap, but in such a way that their attractive forces are far less significant than those of the px​ states. 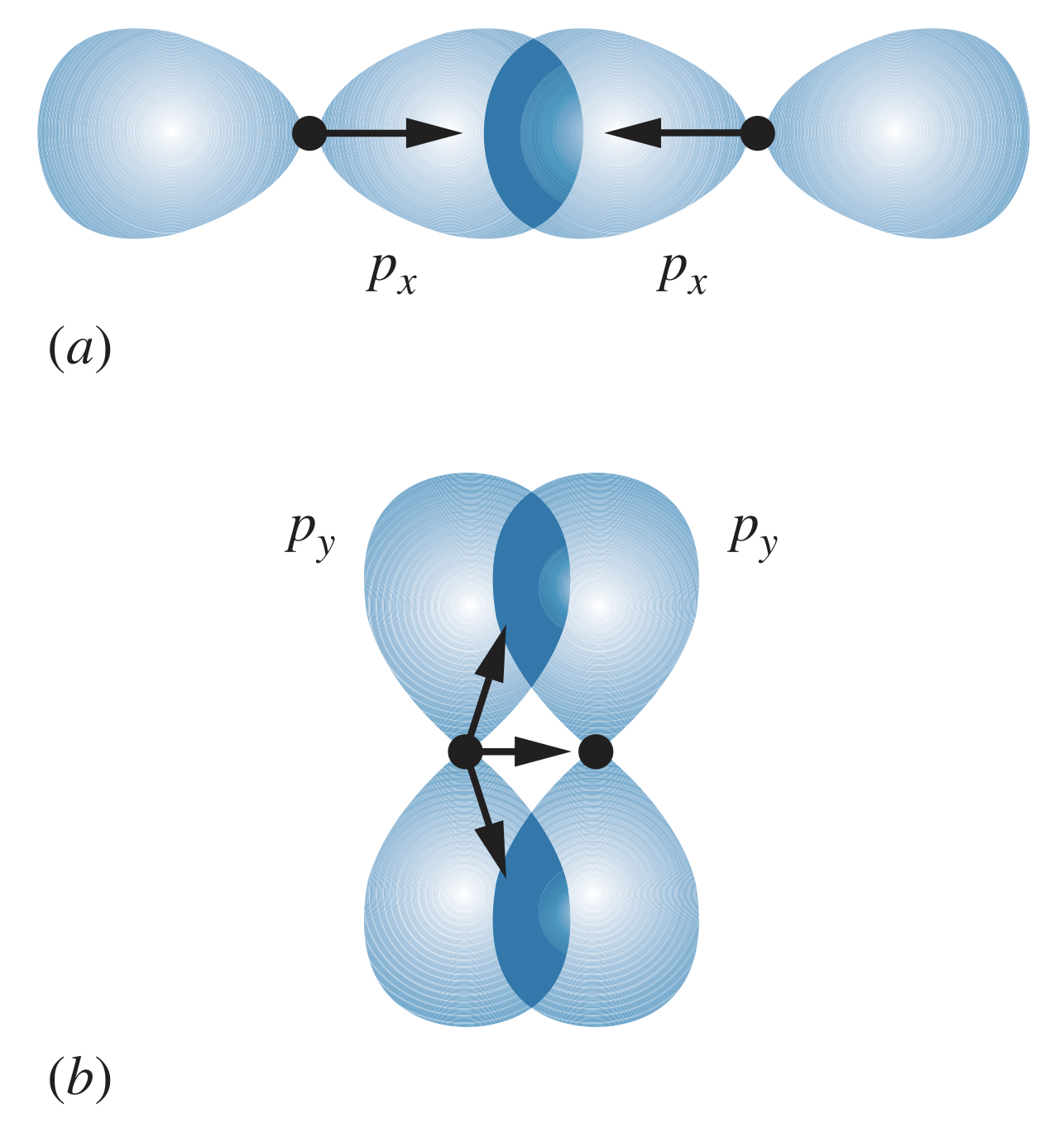 Consider the bonding of two atoms with filled 1s and 2s states and valence electrons in the 2p state. The four 1s electrons occupy the bonding and anti-bonding molecular states, and same with the 2s electrons. This leaves the p state electrons, which begin filling the bonding (lower energy) states. Two electrons can fill each pp covalent bond (px​, py​, pz​) before filling the antibonding states.

It is possible for a stable molecule to form with an atom with an s-state valence electron and one with one or more p-state valence electrons. Fluorine, for instance, has five electrons in the p shell, so it has four paired electrons (two of the 2p states reached capacity), meaning one electron participates in bonding. This creates a lobe-shaped wave function where the signs are opposite on different lobes (one is positive, one is negative). Another atom, such as hydrogen, can bond to the fluorine by overlapping wave functions in such a way that increase the probability of finding an electron in between the atoms (bonding sp state). The other overlapping direction is the antibonding sp state. 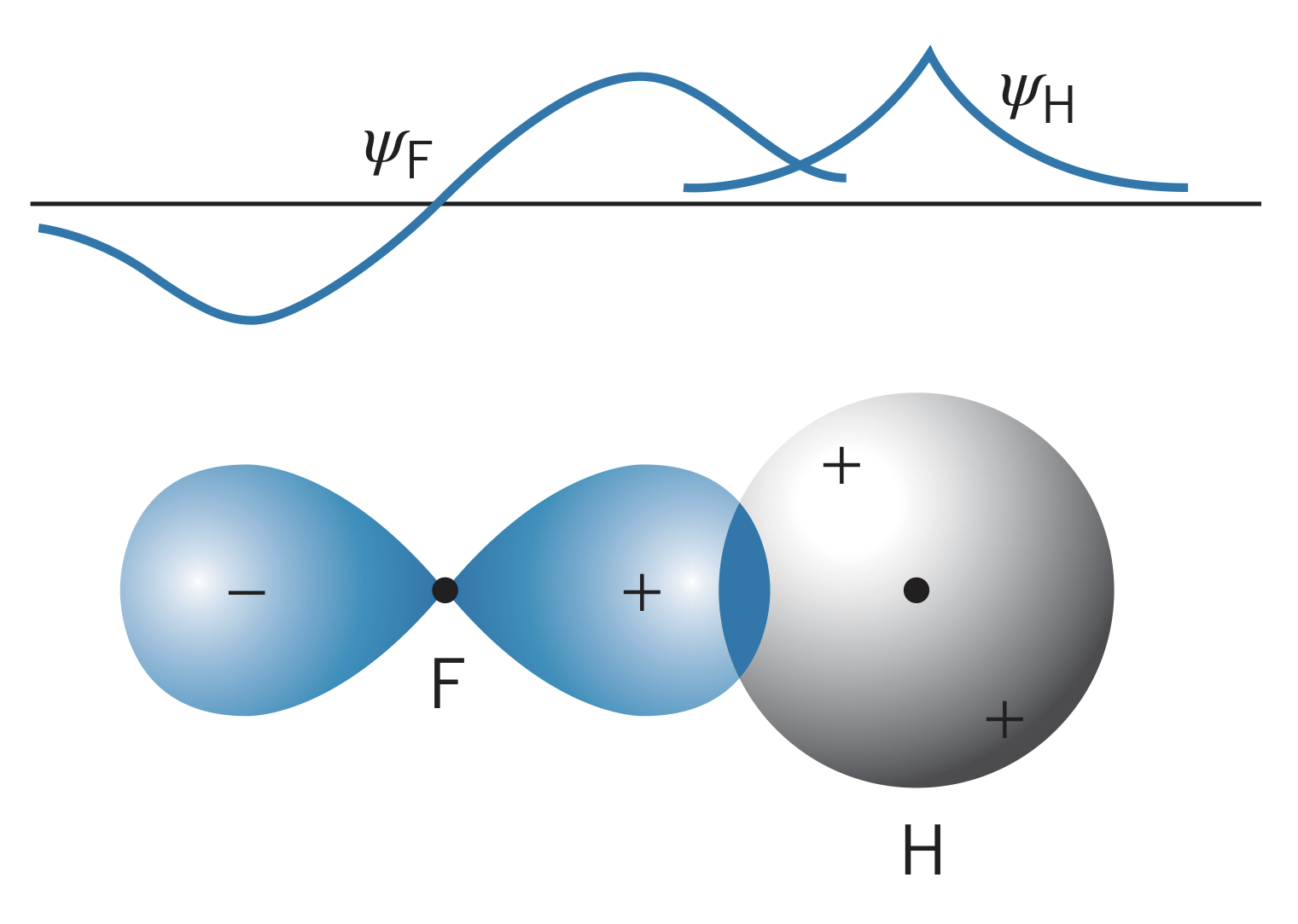 In a water molecule (H2​O), there are four p electrons. They fill one p state completely, leaving two half-filled with one electron each. This allows two bonds with hydrogen, forming the molecule. Water has directed bonds since the relative positions and directions of the bonds are fixed.

Some atoms with p electrons behave as though they have more valence electrons than expected. Carbon, for instance, has an electron configuration of 1s2 2s2 2p2, however it forms bonds as though it has four valence electrons. This effect is known as sp hybridization. The bonds these atoms form are identical, not as if there are two ss bonds and two sp bonds for instance. 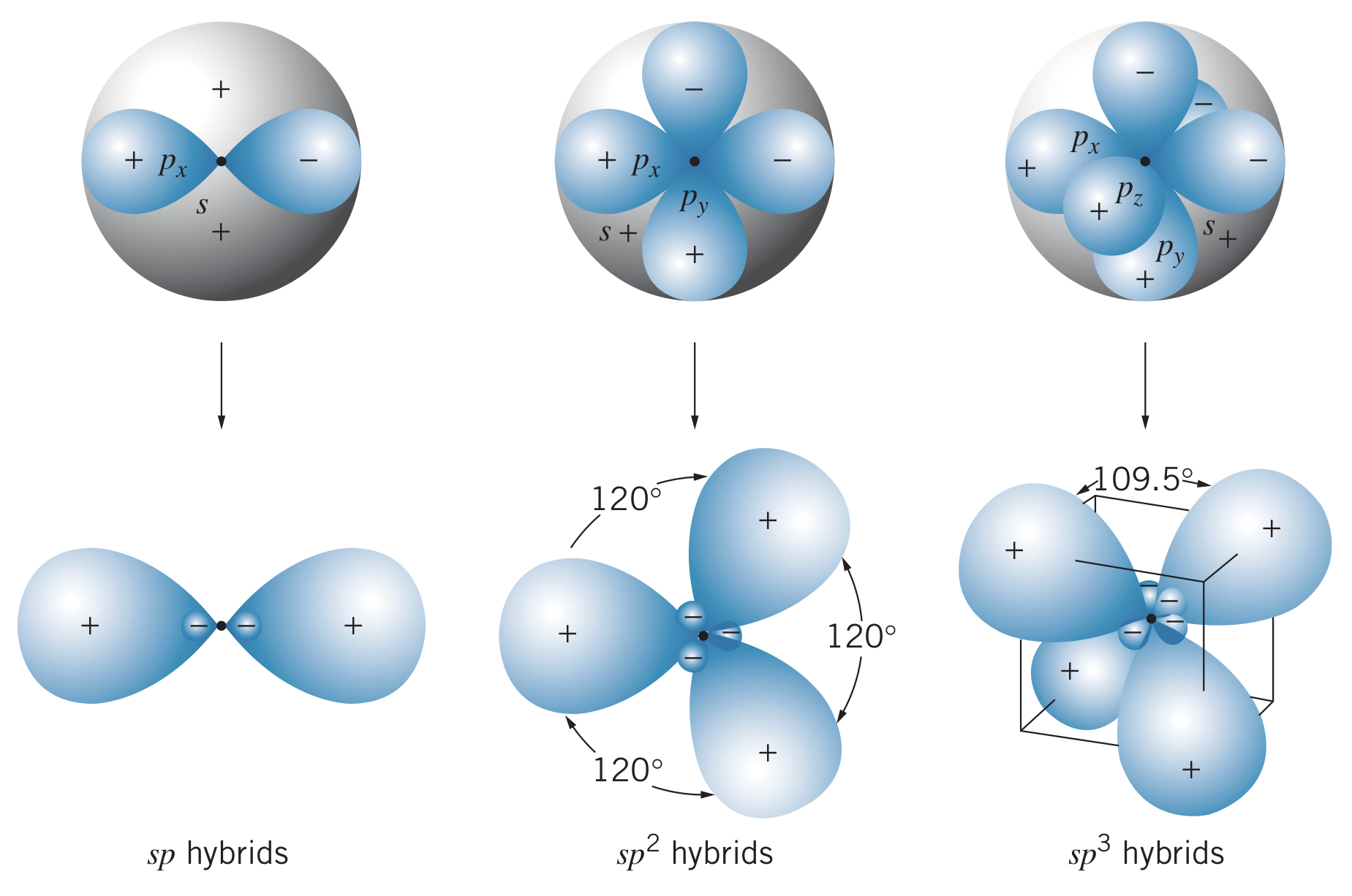 In CH4​, the carbon has four sp3 hybrid states, each of which forms a bond (σ) with a hydrogen. This gives a tetrahedral structure. 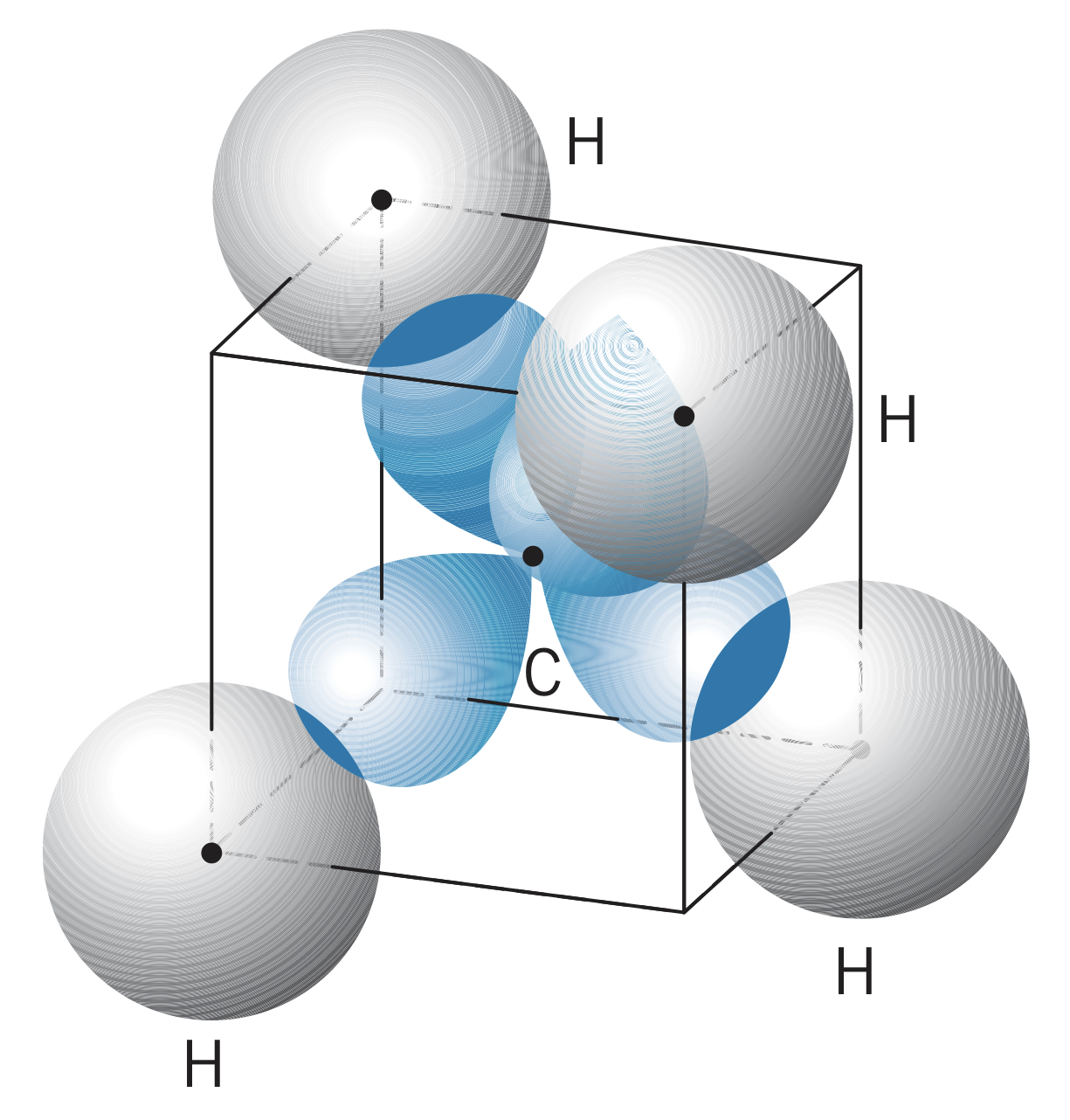 Carbon can also form three sp2 hybrid states, allowing two carbon atoms to bond to two hydrogens each and double bond with each other (one σ and one π).

It is even possible for two carbons to form sp hybrids, allowing one hydrogen each with a triple bond between the two carbons.