Radiation can interact with atomic energy levels in three ways. For one, an atom in an excited state can transition to a lower energy state, releasing a photon (called spontaneous emission):

where the asterisk represents an excited state.

Another interaction is called induced absorption, and occurs when an atom in its ground state absorbs a photon, making the transition to an excited state:

The third interaction is called induced (stimulated) emission. It occurs when a photon of the right energy (equal to the energy difference of the two levels) passes an atom in an excited state. This induces the atom to emit the photon earlier than it otherwise would, making the transition to the ground state.

Note: the two photons travel in the exact same direction with the exact same energy and are coherent, meaning their associated electromagnetic waves are perfectly in phase.

Imagine a collection of excited atoms, all in the same excited state. A photon passing one atom results in photons being emitted, exciting more atoms, etc. until an intense beam of photons is produced all in the same direction. This is a laser (laser is an acronym standing for Light Amplification by Stimulated Emission of Radiation).

While simple, this model does not actually work in practice since it is difficult to keep the atoms in their excited states until stimulated (we do not want any spontaneous emission). Additionally, atoms in their ground state could absorb the radiation, removing photons.

To solve these problems, there must be population inversion, where a collection of atoms has more atoms in the upper state than the lower state. One way to achieve this is by using a so-called three-level atom. In a three-level atom, atoms are excited to a short-lived energy state, quickly decay to a metastable state, where they remain for a relatively long time until they can be stimulated by a passing photon.

Once the lasing transition occurs, however, there will be more atoms in the ground state than the metastable state, removing photons that could contribute to lasing action.

A popular version of the four-level laser is the helium-neon laser, which works with a mixture of helium and neon gas. An electrical current pumps the helium from its ground state to the excited state, then the atoms remain in the metastable state for a while since a 2s electron cannot return to the 1s state by photon emission. Occasionally, an excited helium atom collides with a ground-state neon atom, transferring about 20.6eV of excitation energy to the neon atom. Since neon happens to have an excited state at 20.6eV, the helium atom returns to its ground state:

In the excited state of neon, one electron moves from the 2p subshell to the 5s subshell. It then decays to the 3s level and eventually the 2p ground state. 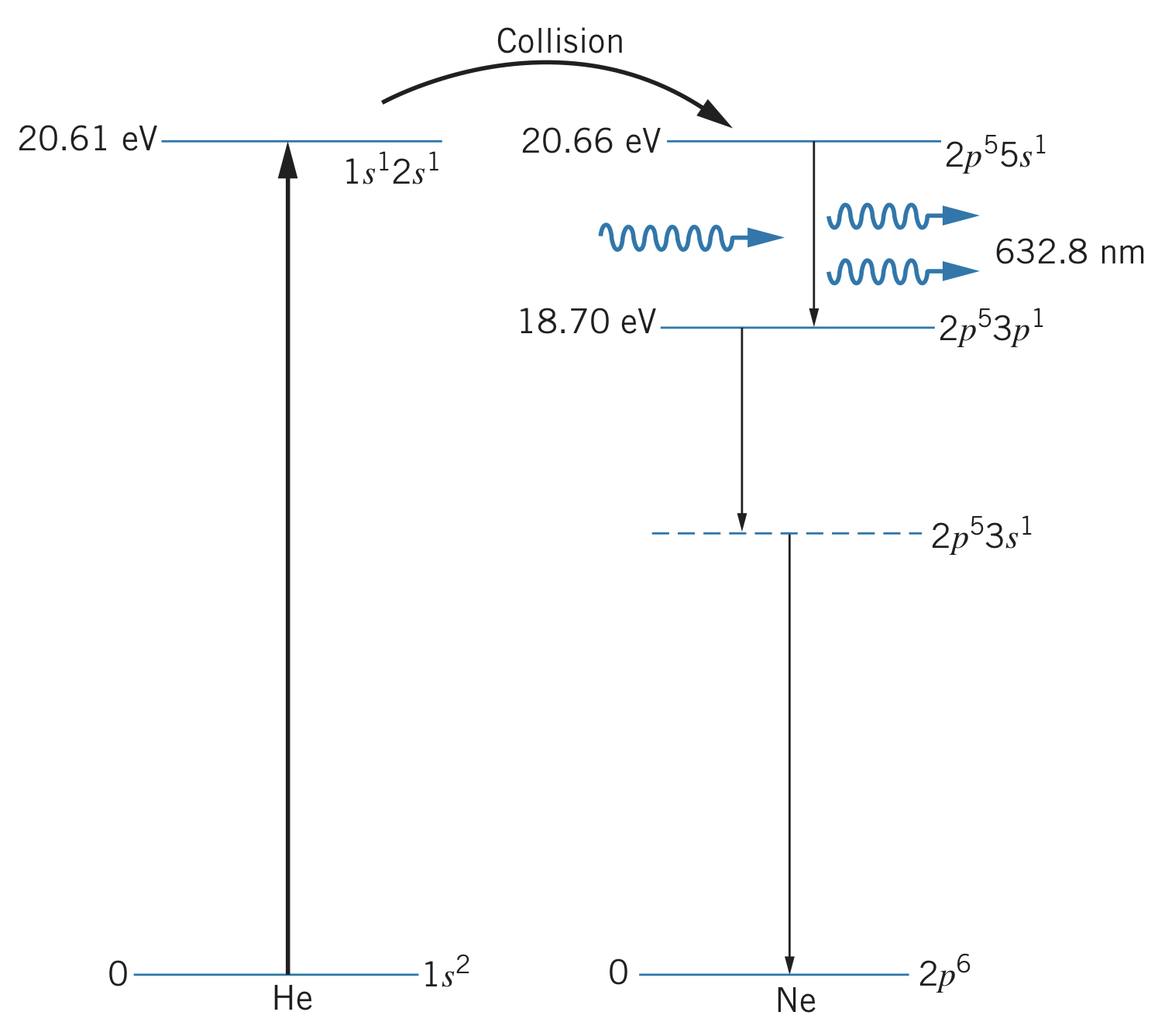 There are always more neon atoms in the 5s state than 3p state due to the match with the helium excited state, meaning there is always the population inversion needed for the laser.

When a neon atom in the 5s state spontaneously emits a photon, the laser effect begins since it stimulates other atoms. Using mirrors, a beam of photons is collected along the axis of the glass tube.