Our knowledge of atomic structure and the physical and chemical properties of elements is based on the following two assumptions:

Using these assumptions, we can build predictions about the physical properties of atoms.

The radius of an atom is difficult to measure due to the uncertainty surrounding the location of the electrons and the fact that different kinds of experiments result in different radii. One way atomic radius is measured is by using the average spacing between atoms in a crystal. Here is the trend of atomic radius for increasing atomic number Z: 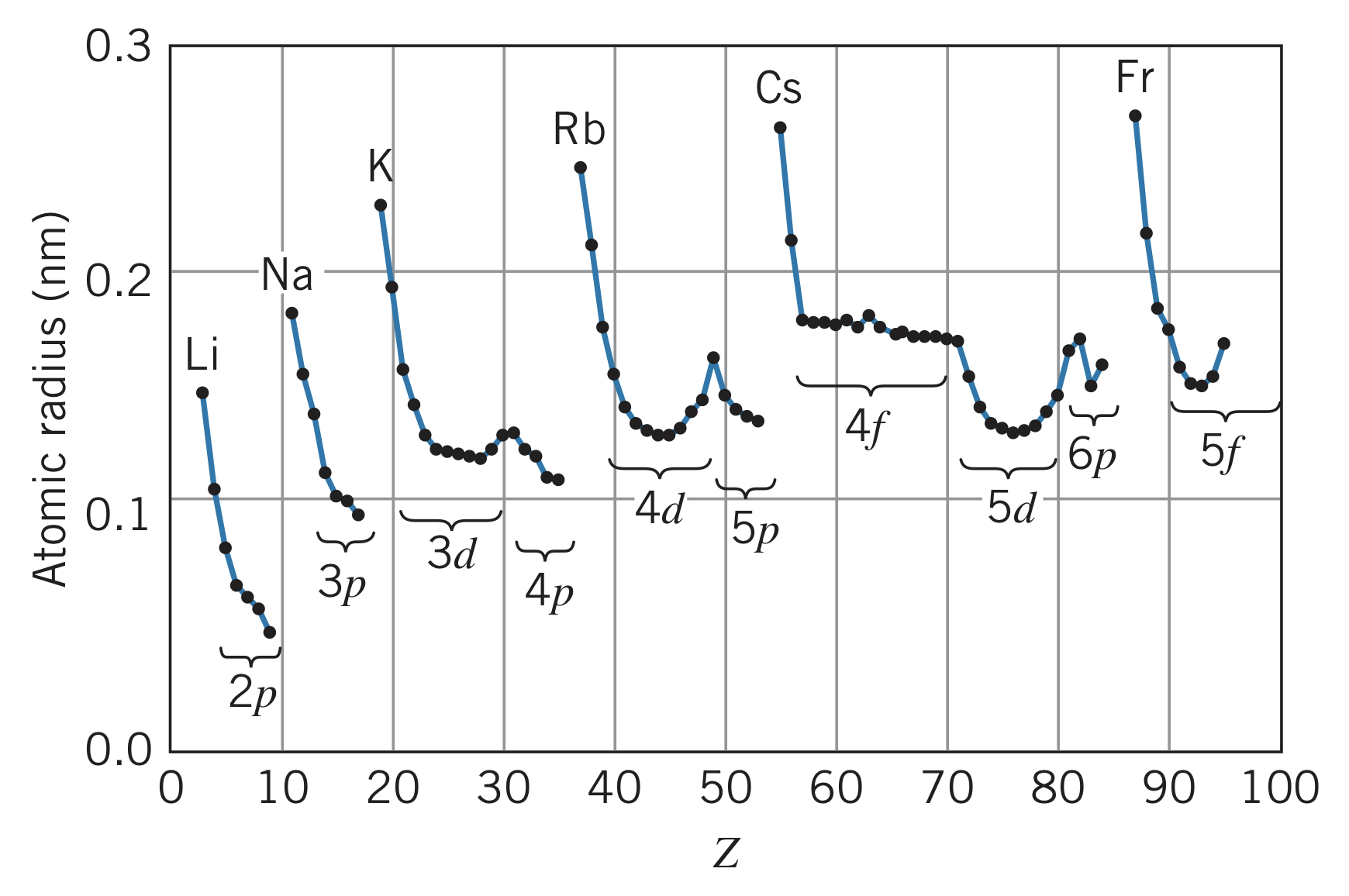 Below is the trend of ionization energy with increasing atomic number Z:

In a material, electric current i flows across a potential difference V according to V=iR, where R is the electrical resistance of the material. Assuming a uniform length L and cross-sectional area A, the resistance is 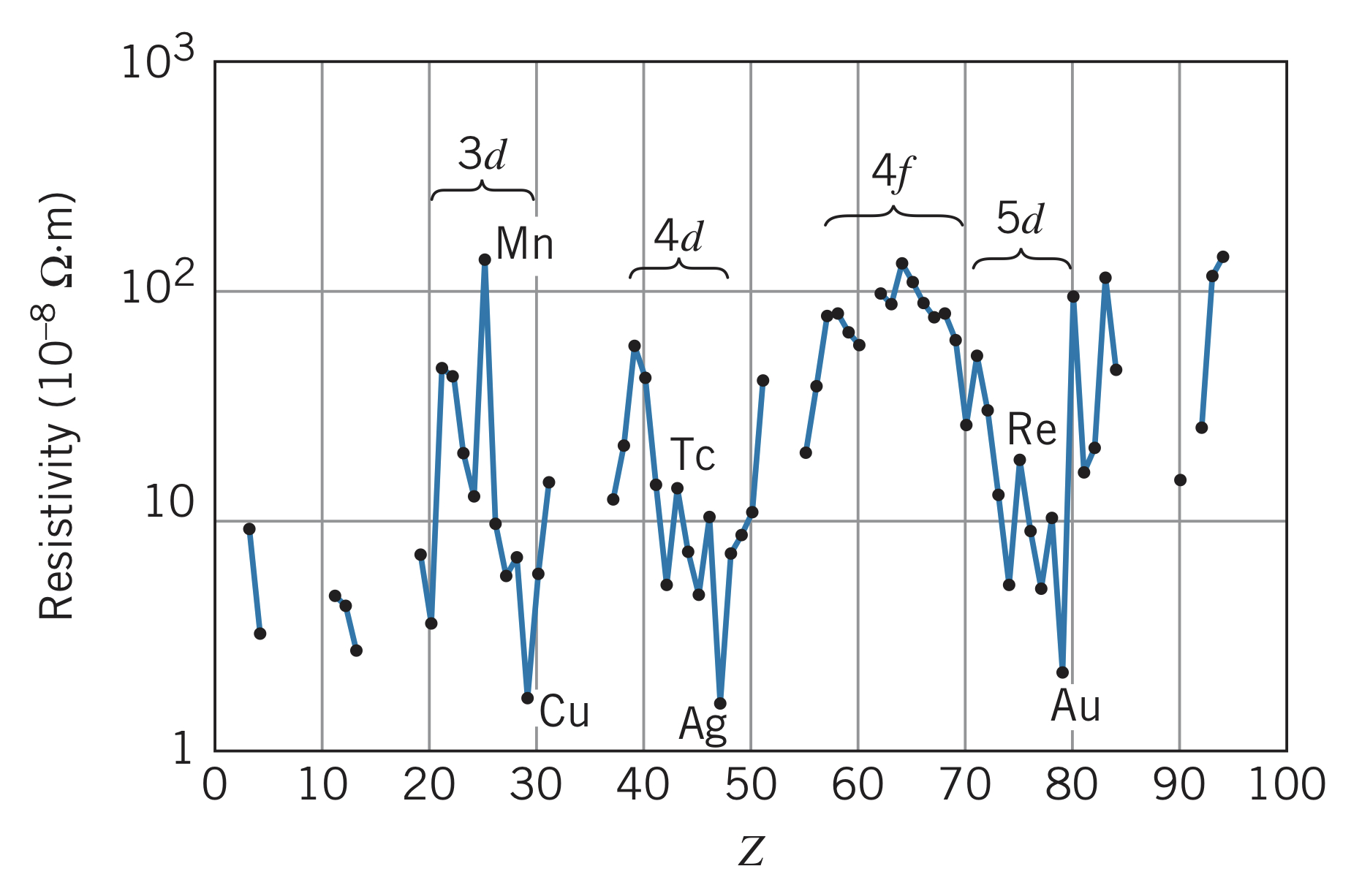 When a material is place into a magnetic field of intensity B, the material becomes "magnetized" with magnetization M, which is (for many materials) proportional to B:

Magnetism depends on both L and S of the electrons in unfilled subshells because of the magnetic moments μ​L​ and μ​S​. This effect is responsible for paramagnetic susceptibilities, when L or S is non-zero. Diamagnetism occurs when a varying magnetic field occurs in an area bounded by an electric circuit, causing an induced current in the circuit. This induced current sets up a magnetic field opposing change in the applied field (Lenz's law). In an atom, the circuit is the circulating electron, and the induced current is the electron slightly speeding up or slowing down. This creates an opposing magnetic field to the applied field B. This is why χ must be negative.

Below is the trend of magnetic susceptibility with increasing atomic number Z:

The last column of the periodic table is filled with inert gases. These elements have only filled subshells, meaning they do not generally combine with other elements to form compounds. At room temperatures, they are all monatomic gases.

The group next to the inert gases are called halogens. These elements lack one electron from a closed shell and have configurations of np5. Since complete shells are very stable, these atoms readily accept electrons to fill their p-subshells. Therefore, the elements are extremely reactive.

Comparing atoms where the p-subshell is being filled, the atomic radius shrinks. This is caused by an increasing nuclear charge, pulling all the orbits closer to the nucleus.

These elements have the largest atomic radii due to electron shielding.

The three rows where the d-suborbital is being filled (Sc to Zn, Y to Cd, Lu to Hg) are called transition metals. Since these atoms have s electrons whose average radii extend beyond the average radius of a d electron, their properties are very similar to one another.

Additionally, transition metals have similar magnetic susceptibilities due to the large orbital angular momentum of the d electrons and the large number of d-suborbital electrons that can couple their spin magnetic moments. This overpowers the diamagnetism of the orbital motion and results in the ferromagnetism of iron, nickel, and cobalt. However, filled d-suborbitals remove the effect of the spin magnetic moments, resulting in non-paramagnetic elements like copper and zinc.

Lanthanide elements (also called rare earth elements) are the 14 elements from La to Yb, typically drawn at the bottom of the periodic table. These elements are similar to transition metals since an "inner" shell (4f) is being filled after the "outer" 6s shell.

Just like transition metals, these elements can have high paramagnetic susceptibilities. Even the ferromagnetism of rare earths is typically stronger than that of the iron group. Unlike transition metals, however, lanthanides sometimes have to be cooled considerably before their magnetic properties are revealed.

Actinides are elements corresponding to filling the 5f shell, typically shown below the lanthanides. Many of their properties are similar to lanthanides. However, most of the actinides are radioactive and not present in nature. Instead, they are artificially produced and only available in microscopic quantities.