Ordinary matter is composed of protons and neutrons (both composed of u and d quarks) and electrons (as well as electron neutrinos). We can therefore create a pair of leptons and a pair of quarks:

Additionally, we know of muons and muon neutrinos, plus charm and strange quarks:

Furthermore, we know of another pairing of leptons and quarks:

Every particle known to physics fits with this scheme of six leptons and six quarks. Particle physicists strongly believe there are no more leptons or quarks to be discovered. Furthermore, the three lepton generations correspond perfectly to the limit of three energies resulting from the decays of heavy particles. Finally, the evolution of the universe would be very different if there had been more than three types of neutrinos.

The strong force between quarks is carried by an exchange particle called the gluon (there are actually eight different types of gluons in the model). Quantum chromodynamics describes how the different gluons and quarks interact with one another. While gluons cannot be observed directly, their existence is confirmed by indirect evidence.

The structure of six leptons, six quarks, and field particles (eight gluons, three weak bosons, and the photon) comprise the Standard Model. It is an incredibly accurate description of our universe, but lacks the unified treatment of forces. 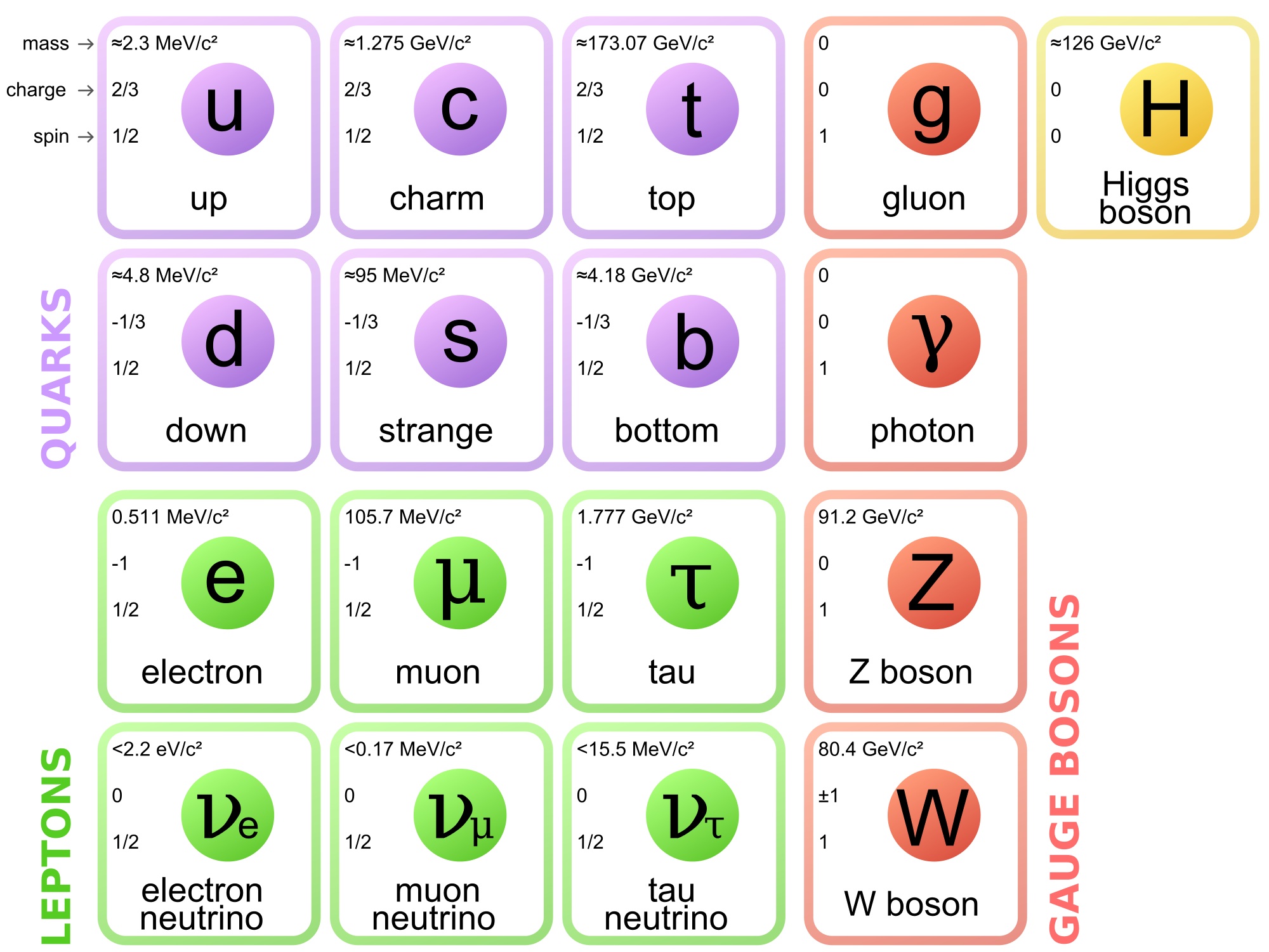 The next level of unification would be combining the strong and electroweak forces into a single interaction. Theories that attempt just that are called Grand Unified Theories, or GUTs. By combining leptons and quarks into one theory, GUTs explain the fractional charge of quarks and the difference of electric charge by one unit in the particle pairings above. The GUTs also predict other phenomena not yet observed, like proton decay. Currently protons are believed to have a lifetime with a lower bound of 1034 years.

One problem with electroweak theory was the prediction that photons and W and Z bosons should be massless. Observations have concluded that the W and Z bosons have considerable masses, similar to midsized atoms. To solve this problem, physicist Peter Higgs predicted the mass symmetry is broken by a permeating field that gives W and Z bosons (as well as quarks and leptons) mass. The interactions of different particles with the Higgs field gives each one different masses. Just like other fields, the Higgs field required its own boson, the Higgs boson. In 2012, the Large Hadron Collider announced it observed a particle with mass 125 GeV/c2 consistent with the predicted Higgs boson particle.

The Standard Model is based on massless neutrinos. While the mass has not been directly observed, electron neutrinos are known to have an upper limit of 2 eV. Measurements of neutrinos from the sun only result in 1/3 of the predicted electron neutrinos, while the total number of neutrinos matches the prediction. This discrepancy is solved by a process called neutrino oscillation, where neutrinos can convert between different types of neutrinos. However, this process can only occur if neutrinos have mass (very small but not zero). To solve this, the Standard Model must allow neutrino oscillation and the rules for conservation of lepton number associated with that.

To solve the numerous inconsistencies with the Standard Model listed above, physicists have begun working on theories like string theory. In string theory, particles are replace by tiny (10−33 cm) strings whose vibrations result in the properties of the particles observed. The problem with these theories is that they only work for spacetimes with 10 or more dimensions, so experimental testing seems impossible.

Another extension of the Standard Model is supersymmetry, a theory that predicts a higher symmetry between the spin-21​ particles and particles with integral spins. In this theory, there would be some electrons and quarks with spin 0 and W and Z particles with spin 1/2. The masses of the predicted particles are predicted to be much larger than their ordinary corresponding particles.

The Quest for Unification

Currently, there is no conclusive evidence of a Grand Unified Theory, and no successful theory that incorporates gravity. This area of research is a very active area in particle physics.